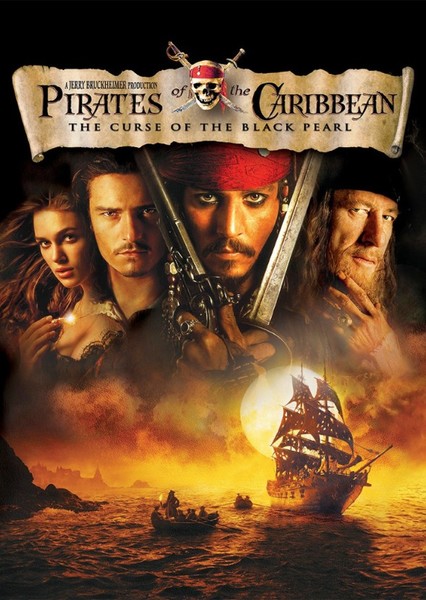 Pirates of the Caribbean: The Curse of the Black Pearl

These actors are frequently suggested for roles along with Pirates of the Caribbean: The Curse of the Black Pearl.

Pirates of the Caribbean: The Curse of the Black Pearl has been suggested to play 68 roles. Click below to see other actors suggested for each role, and vote for who you think would play the role best.

Pirates of the Caribbean: The Curse of the Black Pearl is a 2003 American fantasy swashbuckler film directed by Gore Verbinski and the first film in the Pirates of the Caribbean film series. Produced by Walt Disney Pictures and Jerry Bruckheimer, the film is based on Walt Disney's Pirates of the Caribbean attraction at Disney theme parks.[3] The story follows pirate Jack Sparrow (Johnny Depp) and blacksmith Will Turner (Orlando Bloom) as they rescue the kidnapped Elizabeth Swann (Keira Knightley) from the cursed crew of the Black Pearl, captained by Hector Barbossa (Geoffrey Rush), who become undead skeletons in moonlight. Jay Wolpert developed a script in 2001, and Stuart Beattie rewrote it in early 2002. Around that time, producer Jerry Bruckheimer became involved in the project; he had Ted Elliott and Terry Rossio work on the script, adding the plot device of a supernatural curse to the story to bring it in line with the original theme park ride. Filming took place from October 2002 to March 2003 in Saint Vincent and the Grenadines and on sets constructed around Los Angeles, California. It was also notable for being the first film released under the Walt Disney Pictures banner to be rated PG-13 by the MPAA. The film's world premiere was held at Disneyland Park in Anaheim, California on June 28, 2003. Despite low expectations, the film was a huge box-office success, grossed $654.3 million worldwide; making it the fourth-highest-grossing film of 2003. It received generally positive reviews from critics, with Depp's performance receiving universal acclaim. The film has been widely cited as the film that launched Depp as a box office leading man after many years as a cult movie star. Depp won the Screen Actors Guild Award for Outstanding Performance by a Male Actor in a Leading Role, in addition to Best Actor nominations at the Academy Awards, BAFTAs, and Golden Globes. The Curse of the Black Pearl was also nominated for four other Academy Awards and BAFTAs. The film became the first in a franchise, with two back-to-back sequels, Dead Man's Chest and At World's End, released in 2006 and 2007. Two more sequels, On Stranger Tides and Dead Men Tell No Tales, were released in 2011 and 2017, respectively.