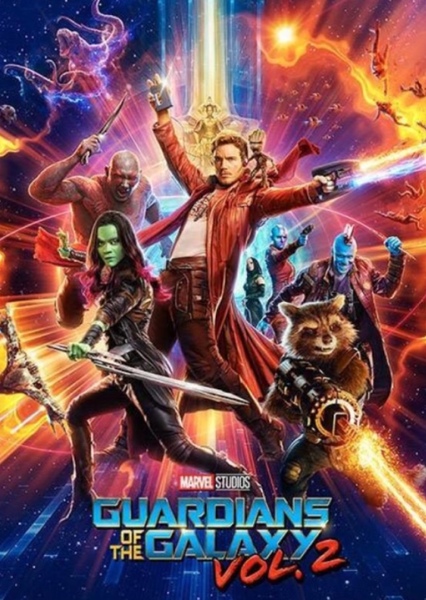 Story added by danthemememan on August 30, 2019

Guardians of the Galaxy Vol. 2 is a 2017 American superhero film based on the Marvel Comics superhero team Guardians of the Galaxy, produced by Marvel Studios and distributed by Walt Disney Studios Motion Pictures. It is the sequel to 2014's Guardians of the Galaxy and the fifteenth film in the Marvel Cinematic Universe (MCU). Written and directed by James Gunn, the film stars an ensemble cast featuring Chris Pratt, Zoe Saldana, Dave Bautista, Vin Diesel, Bradley Cooper, Michael Rooker, Karen Gillan, Pom Klementieff, Elizabeth Debicki, Chris Sullivan, Sean Gunn, Sylvester Stallone, and Kurt Russell. In Guardians of the Galaxy Vol. 2, the Guardians travel throughout the cosmos as they help Peter Quill learn more about his mysterious parentage. The film was officially announced at the 2014 San Diego Comic-Con International before the theatrical release of the first film, along with James Gunn's return from the first film, with the title of the sequel revealed a year later in June 2015. Principal photography began in February 2016 at Pinewood Atlanta Studios in Fayette County, Georgia, with many crew changes from the first film due to other commitments. Filming concluded in June 2016. James Gunn chose to set the sequel shortly after the first film to explore the characters' new roles as the Guardians, and to follow the storyline of Quill's father established throughout that previous film.

Back to Top
View: All Cast Only Crew Only

This story does not allow contributions.