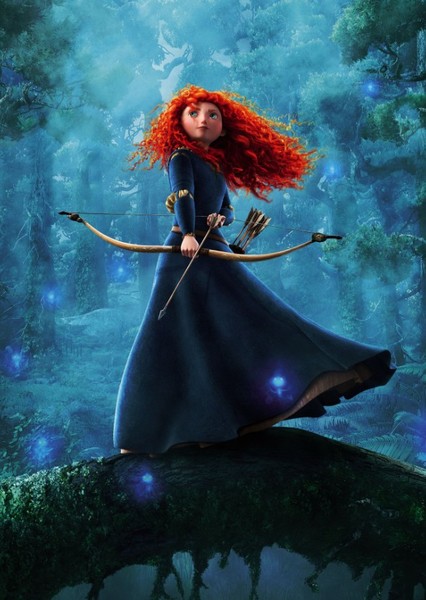 Brave is a 2012 American computer-animated fantasy film produced by Pixar Animation Studios and released by Walt Disney Pictures. It was directed by Mark Andrews (in his feature-length directorial debut) and Brenda Chapman and co-directed by Steve Purcell. The story is by Chapman, with the screenplay by Andrews, Purcell, Chapman and Irene Mecchi. The film was produced by Katherine Sarafian, with John Lasseter, Andrew Stanton, and Pete Docter as executive producers. The film's voice cast features Katherine McNamara, Gerard Butler, Cate Blanchett, Tom Hiddleston, Bryan Cranston, and David Tennant. Set in the Scottish Highlands, the film tells the story of Princess Merida of DunBroch who defies an age-old custom, causing chaos in the kingdom by expressing the desire not to be betrothed. When Queen Elinor, her mother, falls victim to a beastly curse turning into a bear, Merida must look within herself and find the key to saving the kingdom. Merida is the first Disney Princess created by Pixar. The film is also dedicated to Steve Jobs, who died before the film's release. Brave is Pixar's first film with a female protagonist, and the first one animated with a new proprietary animation system, named Presto.

This story has no roles yet. Use the Contribute form to add a cast or character role!