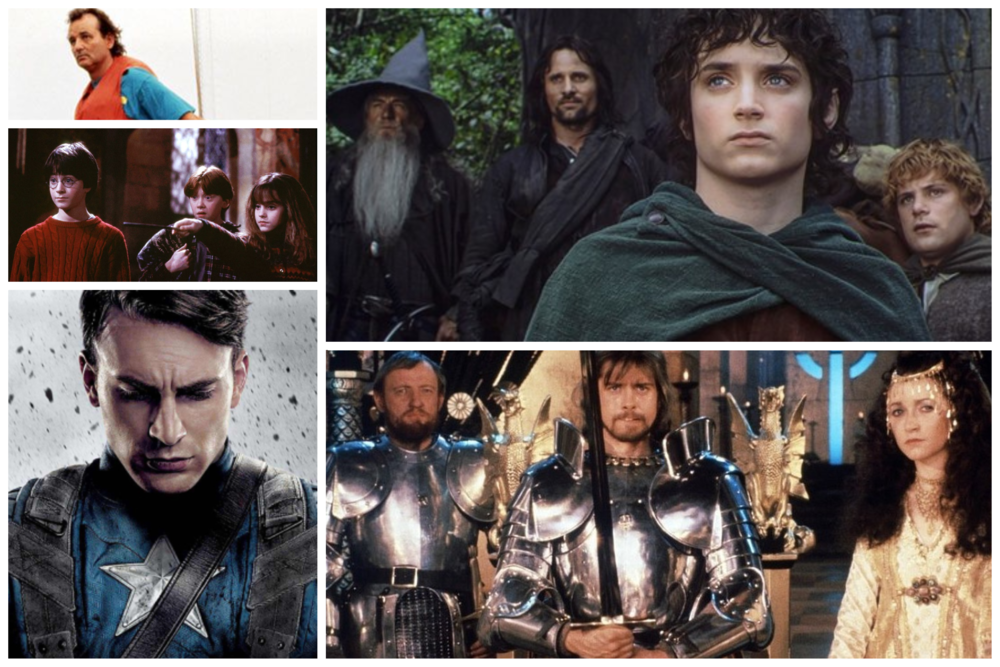 Still the apex of King Arthur movies. Keep an eye out for young Patrick Stewart and Liam Neeson.

Dee Wallace Stone spent the year before E.T. as a reporter that goes to a retreat for treatment from being hunted by a serial killer. Her husband Tom Atkins comes along and find that marriage is difficult with werewolves.

Bill Murray, Harold Ramis and John Candy. Three legends in the military slapstick comedy that was the obvious inspiration for Police Academy.

Weird that it has been 40 years since we were introduced to the character of Ash Williams. How many characters remain popular for that long? Chainsaw hand, boomsticks and shop smart.

Clash of the Titans

Harry Hamlin fighting claymation creatures. No, not the other housewives of Beverly Hills.

Raiders of the Lost Ark

Harrison Ford made archeologists cool and showed he was more than Han Solo.

John Carpenter’s second film of 1981 was one he did not want to do. The studio said they were going to make a sequel with or without him so he thought if someone was going to screw it up, it might as well be him.

A one year turnaround due to the success of the original. Saw wasn’t the first franchise to employ this. History making in that it established Jason Vorhees as the killer and the rest is horror history.

Skydiving bank robbers wearing presidential Halloween masks. The Swayze and Reeves bromance was the lead in to Vin Diesel and Paul Walker.

Thanks to this we all know that the only way to defeat a monster on Halloween is with the help of Eartha Kitt and miak.

Before Veep Anna Chlumsky made friends with Macaulay Culkin and found out he doesn’t like bees.

The Silence of the Lambs

Maybe watching this at 10 was not the best idea. “Ready when you are Sgt. Pembry.”

In the 90’s movies opened with NFL running backs shooting opponents on the field. Now you can’t even touch a quarterback without getting a penalty.

Kevin Costner forgets his accent halfway into the movie and fights Alan Rickman for Maid Marian.

Bill & Ted Follow up their excellent journey by going to hell and fighting copies of themselves.

The spoof movie that is better than the movie it is based on. Random note: I can quote this movie almost word for word.

Disney’s underappreciated hero flick is still worth a watch if you have never seen it.

Possibly the worst sequel of all time. It is like the anti-Godfather Part 2.

Oliver Stone’s film was a game changer and brought the conspiracy about the assassination of JFK to the forefront of pop culture.

The 90’s was the apex of TV shows turned into movies. The Addams Family may easily be the best of them.

A lot of people forget about this Bill Murray comedy. When you are young you think Bob is crazy but as you become an adult with depression and anxiety you wonder how he handled things so well.

Jack Palance won an Academy Award for his role as Curly who takes Billy Crystal, Daniel Stern and Bruno Kirby on a cattle drive.

Father of the Bride

In the 90’s you either wanted to grow up in the McAllister house or the Banks house. Ironically both of them had a Culkin in it.

This movie taught you to not play on railroad tracks or take Kathy Bates’ parking spot at the grocery store.

The first movie that conveyed to the general population what it was like to grow up a black youth in the projects.

The underappreciated gangster film that is mostly only know for the Wesley Snipes crying meme.

The sequel was way more slapstick than the original but still fun. Ninja Rap is still a banger. Don’t @ me.

Julianna Moore took on the role of Clarice Starling from Jody Foster and Hannibal served a Ray Liotta charcuterie board.

Frank the rabbit tells Jake Gyllenhaal about the end of the world.

Not Another Teen Movie

Harry Potter and the Sorcerers Stone

Now you all feel old. Harry and friends started their Hogwarts movie 20 years ago.

When released it was gory and frightening but with Saw and Hostel releasing a few years after it now is like Care Bears compared to them.

Heath Ledger takes his flowing locks to the Middle Ages and teams up with Wash, Robert Barratheon and Vision Chaucer to win a jousting tournament.

Of all the movies on this list this is the one that will make most people go “no way it has been 20 years”. The greatest motion picture trilogy of all time.

Remember those great war movies Saving Private Ryan and The Thin Red Line which released a few years before this? Pearl Harbor is not those. If you ever wondered what it would be like if Michael Bay made a war movie then you got what you wanted and made moviegoers hurt with you.

King Kong ain’t got nothing on Denzel.

Broken Lizard’s comedy classic where we all wanted to be on Team Ramrod. Who wants a mustache ride?

20 years since we were shown Blue Steel. It was glorious.

The Girl with the Dragon Tattoo

David Fincher’s adaptation of the first novel was a great start. So much for the sequels.

Ryan Reynolds still openly makes fun of his Hal Jordan role. Most of it is deserved but Mark Strong was good as Sinestro. That is perhaps the only positive from this 2 hour negative.

The Cabin in the Woods

Underappreciated and undeniably fun. Cabin in the Woods should be watched by all horror movie fans.

From Jake Wyler wearing a whip cream speedo to Steve Rogers saving the world from Nazis. Chris Evans had the definition of glow up.

The other Marvel movie starring a Chris. Hemsworth turned a five minute role in J.J. Abrams’ 2009 Star Trek into the job of the god of thunder. Shows you that no role is a small role.