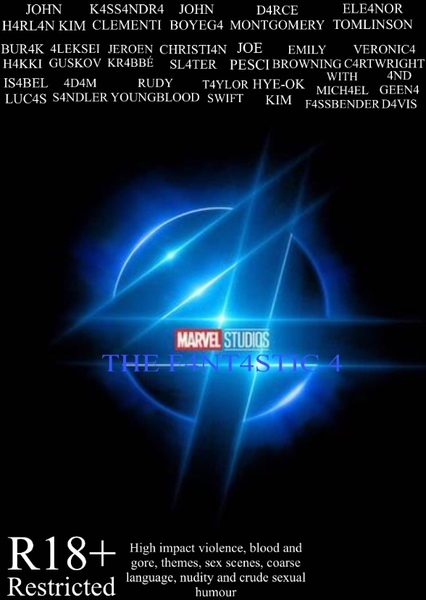 Ideas for F4 despite M.O.M.

Marvel Studios & Xeitgeist Entertainment Group present In association with Phantom Four Films & Arclight Films International A Kevin Feige/DNA Films/Rogue Star Pictures production The F4nt4stic 4 Synopsis: World-class but tormented genius Reed Richards, his best friends Sue Storm and Ben Grimm and Sue’s brother Johnny become a superhero team after a space mission goes wrong which tears their lives and relationships apart, only to unite and fight for each other and those around against malignant enemies with extinction on their minds. Length: 199 minutes Trivia: * Kim, Clementi, Boyega and Montgomery are the first non-American actors to play the F4 as a whole. * First R-rated MCU, Disney and Fantastic Four film and Marvel film classified R18+ in Australia. * First live-action Fantastic Four movie with mutants and without Doctor Doom. * The number of f-bombs is a reference to the prime Marvel universe. * First Fantastic Four film to feature previous Fantastic Four actors in different roles. * First most profane globally released film not set or filmed in New York and filmed in Australia. * The number of mutants refer to the number of films in the original X-Men series. * Michael Fassbender is the first X-Men actor to star in a film with mutants but not play a mutant. * Ginga is Japanese for galaxy. * The Axi-Tun’s racist term for outsiders “Tulnuk” comes from Tulnukas, Estonian for alien.

Fan Casting Roles for The F4nt4stic 4